Commissioners for the People’s Inquiry 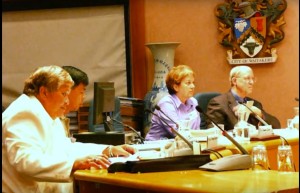 Professor, Dept of Pharmacology and Toxicology College of Medicine, University of the Philippines. Professor Quijano is a Member of the National Research Council of the Philippines and the Philippine Society of Clinical & Occupational Toxicology.  He is particularly valued for his work on behalf of indigenous populations poisoned by the aerial spraying of pesticides.

Professor in philosophy, bioethics and human rights, in Seattle, Washington, USA. Dr Kerns writes and lectures about low-dose toxicant induced illness and environmentally induced illnesses, including an interdisciplinary course titled Choices that can Kill: Ethics, the Environment and Threats to Human Health. He is the author of Environmentally Induced Illnesses: Ethics, Risk Assessment and Human Rights .

Senior Lecturer in the School of Political Science and Communication at the University of Canterbury, Convenor of the Science and Technology Studies Network and Deputy Director of the New Zealand Institute of Gene Ecology.  Dr Goven brings both a knowledge of science and a very strong community participation perspective.  She is engaged in developing methods for incorporating public participation into decision-making on issues involving science and technology.

Dell Wihongi was a Maori elder of national and international standing. Her numerous commitments and past posts ranged from Leader for Intellectual Property Rights (1989) to Chairperson of the Confederation of United Tribes of Aotearoa, New Zealand (1990) and Chairperson of the Taihauru House, Portfolio for Womens Affairs (2005).Dell was one of the initiators of the Wai 262 Claim filed with the Waitangi Tribunal in 1991.

Sadly, Dell passed away on the 27th July 2008 and her loss is mourned by many.